The Doves Press Collection comprises both books and ephemera, including some of the most notable books created by the press. These include John Milton’s Paradise Regain’d (1905), works by William Wordsworth, a five-volume copy of The Bible, which was the press’s masterpiece, completed in 1905, and ephemeral items including order slips and catalogues. One of the great English private presses, Doves Press set the standard for printing in the twentieth century. Thomas J. Cobden-Sanderson (1840–1922) and Emery Walker (1851–1933) established the press in 1900 using the pre-existing Doves Bindery, which was named after the Doves Tavern in Hammersmith, England. Doves Press books were very different from most of the private press books being published at the time and soon became known for their simple and austere look. The books generally lacked decoration, except for red initial letters created by calligrapher Edward Johnston. Text was hand-set and printed in a single size of a clear, new typeface, based on Nicolas Jenson’s Roman type from the 1470s (the type was notoriously destroyed in 1916, when Cobden-Sanderson threw it into the River Thames after the dissolution of the press). Many books are bound in limp vellum, and some are distinguished by ties made of green silk cords. Cobden-Sanderson’s willingness to experiment and his drive for perfection positioned the press as a significant contributor to the Arts and Crafts Movement (see also Curwen Press), a design movement that sought to resist industrialization by reviving or innovating craftsmanship and the decorative arts. 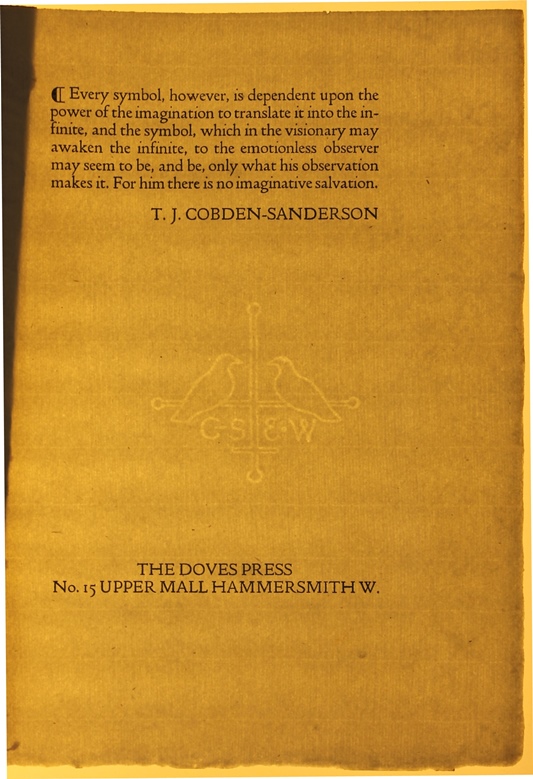 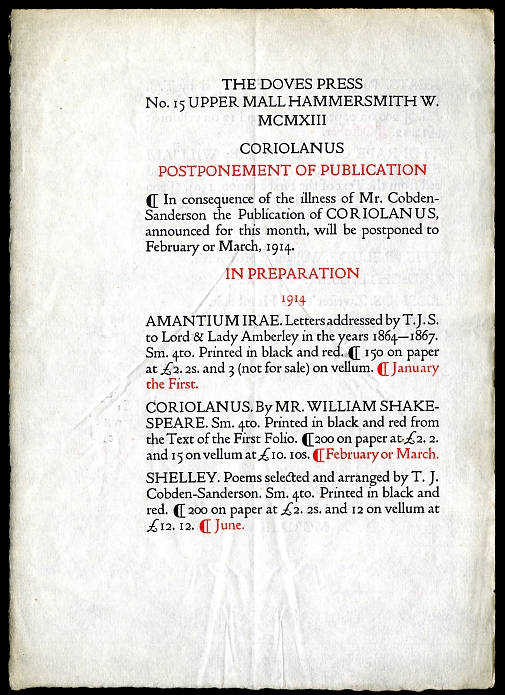 Notice of "Postponement of Publication" for Coriolanus and of works "In Preparation." From a collection of Doves Press ephemera (Z 232 C65 A1 1900).